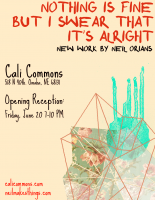 Art that makes an impact doesn’t typically come from easy, comfortable parts of life. Every artist strives to create meaningful pieces that touch the viewer, causing a lasting impression. Usually that means connecting through mutual strife. Everyone has experienced anxiety in their life, whether situational or as a daily trial. Neil Orians shares his personal battle with anxiety in his upcoming show, aptly titled “Nothing Is Fine But I Swear That It’s Alright”.

Neil is most comfortable calling himself a printmaker, but lack of accessible materials and equipment since college has caused him to explore other mediums, such as drawing, photography, and stitchery. He believes in content over process, and that’s what really makes his work shine. He doesn’t believe in pretentiousness, as he puts it, he just makes things. From simple designs to multi-layered collage pieces, his work reflects the spectrum of human emotion itself.

His experience in undergrad was less than stellar. He felt unwelcome and written-off in his program. Perseverance won out, and he battled his anxiety and worked to hone his skills. From this dark and turbulent point in his life came some of his most personal and striking work. Struggle has been almost constant in his life, but as great artists do, he’s turned it into some of the most amazing pieces he’s created. He recalls that because of this experience, art added to his anxiety for a long period of time. Luckily for us, he kept at it.

His goal is for the viewer to experience what he’s thinking, sharing his inner psyche through both subtlety and overt expression. Anxiety is such a relatable emotion that everyone can identify, and pull out certain parts of their lives that perhaps can become more beautiful through viewing Neil’s work.

He’s preparing to start grad school at U Conn in the Fall, working toward his MFA in visual arts. He finally feels as though he’s found his place. Excited to be a part of a program where he feels welcomed and accepted, we just hope that he can take the beauty and emotion that’s come from anxiety and finally share his experiences in warmth and welcoming.

His show will feature an array of pieces, with an emphasis on interaction. He wants art to be accessible, featuring a table where viewers can price-bargain for smaller pieces. Empowering others through art is something he’s passionate about, and something we’re certain he’ll continue to do throughout his career.